Why I Did Movember 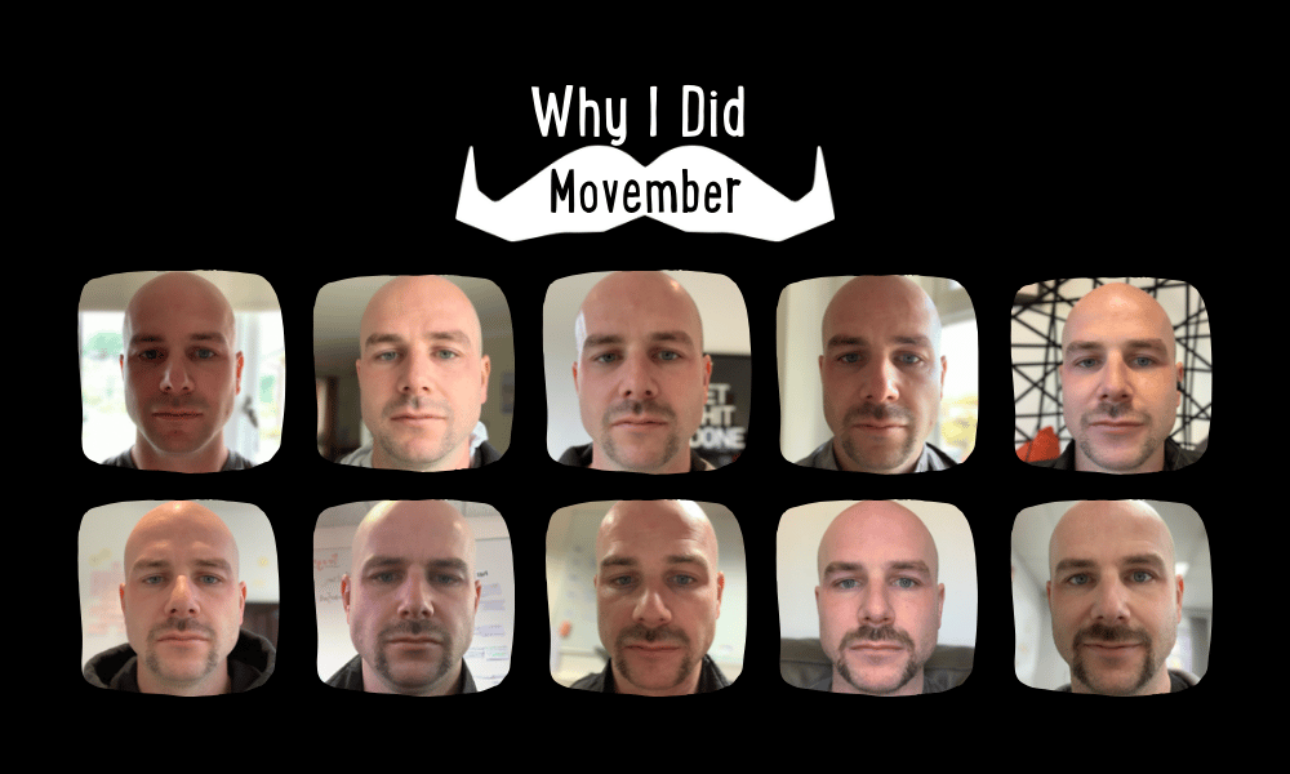 Movember is an interesting month! Seeing lots of guys with dodgy moustaches makes me smile. But Movember means something more to me than the Moustache challenge and the other activities the Movember Foundation organise. It is one of the few organisations to prioritise the health and wellbeing of men. Men get a bad rap in society these days, sometimes for good reason, and it’s certainly true that men have historically dominated in society, creating rules and regulations that have benefitted them. However, I am glad to see things are changing and we are becoming more equal as a society.

“…how do we support men who make mistakes to deal with them in a healthy way?”

How do we support men who make mistakes to deal with them in a healthy way and, as a society, support them to make good choices? And importantly, how do we help them avoid further destructive behaviours, including suicide, which is still the biggest killer of men aged 16 – 45. Men are 3 times more likely to commit suicide than women and at least part of the reason is our ability to deal with difficult situations.

I have a huge passion for Men’s Health. Although it is being recognised more and more, especially over the past couple of years and with the focus on mental health and wellbeing of late. But I still see a lot of men unable to deal with their issues, mainly down to inadequate social networks, or at least social networks where they can talk about things that really matter and when they are struggling.

Despite having great social networks and being open to talking about my issues with people, I experienced this in 2011/12, and it literally changed my life.

I made a couple of mistakes in my relationship. I have very high standards for myself and I didn’t meet them. I pride myself on being someone that other people come to for advice. Unfortunately, the advice I would give to others, meant nothing to me at the time and I began lying to everyone around me. Instead of talking about the issues I was facing, being honest with people around me and giving myself an appropriate, but not excessive, hard-time, I went in hard on myself. I lied to my friends, family and work colleagues. Every time I tried to snap myself out of it, I failed. I spiralled over a period of months, putting a face on every day at work, laughing with my colleagues and crying in my breaks. I started to smoke, purely to punish myself. I would smoke 3 or 4 cigarettes in a row until I was sick whenever something would happen to trigger me.

“I was hurting people I cared about but still couldn’t do anything to change, I was paralysed.”

I spoke to a couple of lovely people about what was going on and they reassured me that I wasn’t a bad person and tried to support me. But I was trapped by my decisions and unable to see a way out. I was hurting people I cared about but still couldn’t do anything to change, I was paralysed. I ended up praying for something to intervene; anything; a job somewhere else, illness, nervous breakdown, even death. On two occasions I came dangerously close to jumping into the road in front a 44 tonne truck just outside of my work, stepping into the road with the intent of quieting my internal dialogue that ‘I was scum’. I only half stepped out and the lorry moved too, the combination of which are the reason I am able to write this blog. Not many people know that bit, and it is only now I feel like not only can I share it, but I should share it.

“The light at the end of the tunnel (a very long one) was that they were actually happy. Could I be happy again?”

Trying to move on

Whilst this was going on, I was turning a long-time passion project, BeeZee Bodies (now BeeZee Families) into a business because we needed to hire someone and didn’t have a legal vehicle to do it. So, starting a business looked like the only way to go. You really can’t joint the dots looking forward; I love running the business now! But at the time, it was just another hassle.

After starting the business, after a year of turmoil, I told myself that no matter what, I was going to make a decision and stick to it. The issue I faced up to that point was that whatever decisions I made to change my situation, my disdain for myself and the inevitable pull back in the other direction left me feeling isolated and indecisive. I still craved a breakdown or even death. So, I told myself that I was going to work so hard on the business and on building services that improve, and change peoples lives that even if it made me ill, it would be worth it. My thinking was that when you hit rock bottom, none of the back and forth would happen any more, it couldn’t, you wouldn’t have the mental capacity for it and you would have bigger problems. I thought of it as being a reset, a reset that I wanted/needed.

“After a significant period of not being myself, I started to find congruence again.”

This was the start of my salvation. However, it was a long and hard road back, with lots of setbacks. Every time you encounter people or things from your life pre-mistake, you have a relapse. You don’t know how to exist back in that environment anymore. But the key for me was getting back to the point of brutal honesty. I had always done everything I had ever done with integrity and honesty. The word ‘congruence’ was a good description of how I lived my life. I expressed on the outside what I genuinely believed on the inside. After a significant period of not being myself, I started to find congruence again. I told the truth to everyone again and it felt better. Not good. But better. This took place very gradually over a period of 2-3 years, if not longer. The truth was that people weren’t judging me for this anymore. Whilst it seemed like a big deal in my life, other people are interested in what is going on in their lives for the most part.

It took me 7 years to be truly ok with making mistakes. It doesn’t help that I am a perfectionist, but I have been able to move past my mistakes and in the process have built a company and career that I am proud of. I am proud because I think we focus on the things that matter. We focus on quality of services; truly providing holistic support to people based on their real-life issues. Weight is just a by-product. But also, I am proud and humbled to be able to work with such an amazing group of people over the years (current BZ staff and the Alumni, most of whom we are still great friends with) and to have provided them with an opportunity to do meaningful work, changing lives, but to have fun whilst doing it. Work doesn’t have to be boring, it should be inspiring and fun. I don’t know if I would have put as much effort into this business if I weren’t in such dire straits back then. Maybe I would have. But my mistakes taught me a lot about myself and other people and I now take every opportunity to talk to other people, particularly men, about my mistakes and how I handled it. It was hearing other people talk about their mistakes that freed me to talk about mine and seek support. So that’s what this blog is.

“I now take every opportunity to talk to other people, particularly men, about my mistakes and how I handled it.”

If you are a man, or know a man, that has made mistakes, any mistakes, and who doesn’t know what to do. Or if you are someone or know someone who is spiralling, talk to them. If you are too close to what is going on, refer them for support. Movember, as well as many other mental health charities offer support to people going through hard times, even if you caused those hard times! I would also be happy to chat to people in person, on the phone and electronically. I have a longer, more detailed version of this blog that provides specifics of my situation. If it is helpful to some men, I am happy to share it. Please get in touch at stuartking@beezeebodies.co.uk

Finally, please donate to Movember – you can donate to our group page here: https://tinyurl.com/yx5cgk7p. They are doing an amazing job of supporting men in many ways and are worthy of your time and money.

I want to help more men who have made mistakes. I want them to find a way to deal with their emotions when they don’t know how to. But I want to use my experience in behavioural sciences to offer this support.

Men need support in a very specific way. Toxic masculinity, poorly constructed social networks, lack of depth and understanding in friendships and ineffective support networks lead to men being unable to share their issues and effective seek counsel. We will offer a structured, accessible offer to gradually coach men into seeking appropriate support to talk about their issues and gain perspective, emotional support, practical support and ultimately move towards resolution.

I want to do this by offering the following:

It may be that some or all of this already exists – although I can’t find it. I will do some research and involve myself with men’s health charities to see what I can add and if possible, will start my own charity if a suitable vehicle doesn’t currently exist.

If you are interested in helping me develop this idea and creating a charitable organisation to help men who have made mistakes to deal with their issues, prevent suicide and help men thrive, please get in touch – stuartking@beezeebodies.co.uk